Magic in the Mountains 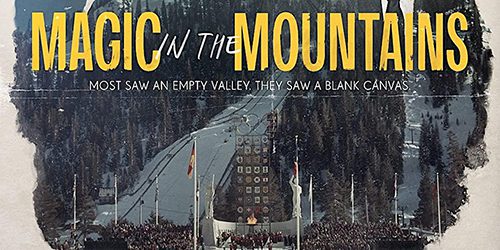 The remarkable underdog story of how Squaw Valley, a little-known ski area in California, won the bid for the 1960 Winter Olympics and, with the help of Walt Disney, changed the Olympics forever.

The SNOW Sports Museum and Coolfire Studios are proud to present Magic in the Mountains on October 19th at the Tahoe Art Haus & Cinema (two showings) in Tahoe City and  October 22nd at the Truckee Community Auditorium at 7 pm (doors open at 6 pm). Raffle prizes and a post-movie Q&A, with some featured principles from the movie, will take place after the screening.

Magic in the Mountains tells the remarkable underdog story of how a little-known ski area in California, won the bid for the 1960 Winter Olympics and, with the help of Walt Disney, changed forever the ways in which the Games were presented. The documentary features never-before-seen archival footage from the 1960 Winter Olympic Games in Squaw Valley and revealing interviews with participating athletes and attendees. The 1960 edition of the Olympics introduced a substantial array of “firsts,” including such innovations as live broadcast, instant replay, sponsorships, and an official Olympic Village for the athletes. Perhaps most importantly, thanks to Disney’s involvement in producing the Games, Squaw Valley featured an unprecedented — but soon-to-be standard — level of pageantry for the opening and closing ceremonies.

The Sierra Nevada Olympic & Winter Sports Museum (Squaw Valley Ski Museum Foundation) is actively working to preserve the winter sports and Olympic history of the Sierra Nevada Region, share stories of the legends of winter and inspire generations to experience the wonder and passion of our unique mountain spirit.

As a nonprofit, we depend on the generosity of individual donors. Your contribution enables us to do the groundwork that is critical to move the ball forward in building this dynamic museum. Please consider making a DONATION.