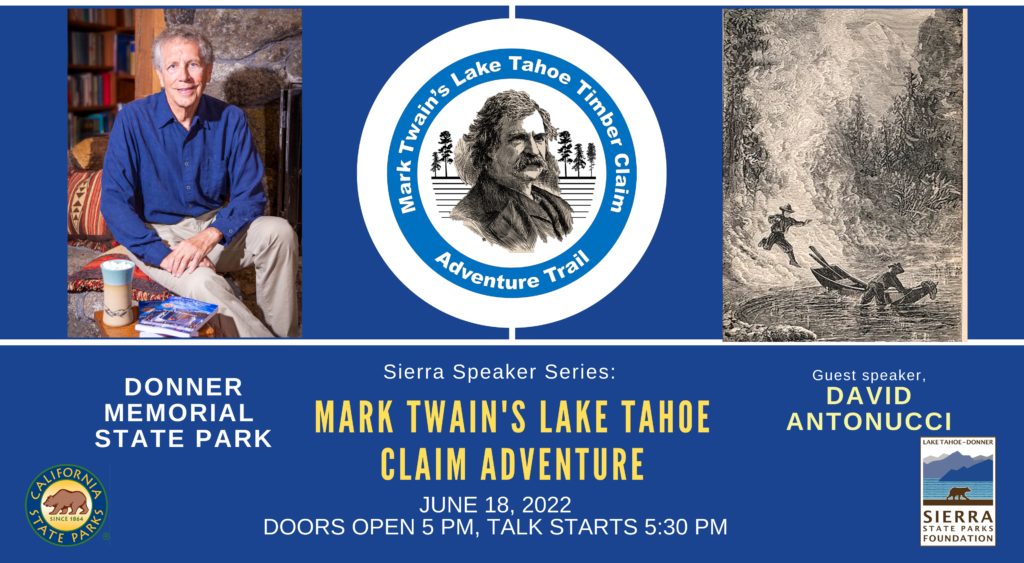 The monthly Sierra Speaker Series connects folks to the rich cultural and natural history of the area. Join us on May 14th at Donner Memorial State Park Visitor Center to learn and engage! Doors open at 5 pm, and the presentation is to follow at 5:30 pm. Admission is a suggested $5 donation. Light refreshments will be available. Parking is free after 5 pm.
In 1861, Samuel L. Clemens, the man who would become Mark Twain, hiked to Lake Tahoe to stake a claim for a “timber ranch.” He spent many blissful days on the lake but carelessly allowed his campfire to escape, creating a spectacular wildfire. He later wrote about his Tahoe experiences in his 1872 creative nonfiction trav¬elogue and memoir, Roughing It.
Author David C. Antonucci’s presentation will lead you through Mark Twain’s footsteps from Carson City and identify the locations where he camped and relaxed at the lake. See the same views that inspired him to declare Tahoe the “fairest picture the whole earth affords.” Learn about Antonucci’s extensive historical and scientific research that went into reconstructing the timber claim adventure narrative.
The presentation will introduce the Mark Twain Timber Claim Adventure Trail. This trail connects the historically significant points in Twain’s adventure, including the location of his first sighting of Lake Tahoe and the site of his ill-fated timber claim and wildfire. There are newly installed and existing interpretive panels in each of the seven areas that describe the site’s literary and historical significance and Mark Twain’s activity there.
Copies of David Antonucci’s companion book, Fairest Picture – Mark Twain at Lake Tahoe, are available.
Authors’ Bio:
David C. Antonucci is a published author and historical researcher who has written an award-winning book on the 1960 Winter Olympics and featured in the 2021 film documentary Magic in the Mountains. In addition, he has written the book Environmental History of Lake Tahoe from Fonthill Media which is scheduled for release this summer. Antonucci lectures at the Tahoe Environmental Research Center on Lake Tahoe’s cultural, natural, and ecological history. He is a civil and environmental engineer and a 47-year resident of Lake Tahoe.